…If you could catch a falling star, you wouldn't put it in your pocket. You would wear it for the world to see. And then pass it on to your family as a cherished heirloom.

The new Vivinity cut diamond, is poised to become the shooting star of gemstones when it is unveiled through 2009. Capturing the essence of light, love and life, the Vivinity is a product of an international between noted jewelers Leonard J. Strnad II, proprietor of Vivid Diamonds, Design & Timepiece Gallery, Vivid Jeweler's and Vivid Jewelers Website and Japan's John Kodama for this unique revolution in 21st Century gemology. With patents and trademarks pending in 2010, the Vivinity is a startling diamond cut that leaps into life with up to 400% more brilliance and dramatically larger diameter per carat weight.

The Vivinity crown is described as the modification of the ideal cut diamond and gemstone natural and synthetic. That enables the diamond or gemstone to be up to four hundred (400%) percent more in brilliance after modifications. Brilliance defined as light reflected up through the surface of the diamond after the application of the cutting process. This performance has been and is tested on the GEM EX machine (Brilliance Scope) patent #5,615,005. Each time the white light (brilliance) falls in the very high range on a scale from low, medium, high, and very high. 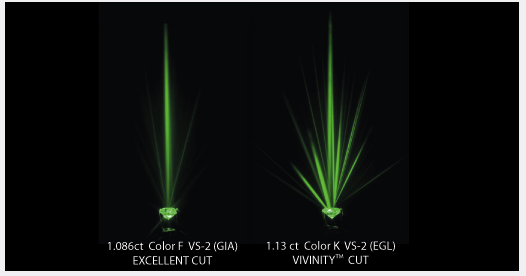 The technique also lightens the body color of the gem by two (2) shades on the color scale. The cutting method also has approximately ten (10%) percent more in diameter dimensions per carat weight when compared to a traditional cut, and thus appears larger in size than a traditional diamond of the same weight.

The method of cutting will vary the weight of the gemstone from ten (10%) percent to sixty (60%) percent depending on the method applied. Diamonds and gemstones natural and synthetic are sold by the carat internationally. Thus, the Vivinity method of cutting illustrates a significant saving to the consumer when we apply the equation cost per carat vs. diameter. The method of cutting is distinguished by the "crown angle of less then twenty-three (23) degrees, with a table of fifty (50%) percent of it total diameter/width of the material”.

Creation of the VIVINITY™ Cut

Leonard J. Strnad II, founder of Vivid Diamond, Designs & Timepiece Gallery, will introduce the K-Crown, L-Crown project (Vivinity) to the United States. The affect that the K-Crown and L-Crown can have on the jewelry industry may lead to a change in how the industry cuts diamonds and gemstones natural or synthetic. John Kodama is the inventor of the K-Crown, while Leonard J. Strnad II is the inventor of the L-Crown. Vivid is the entity that applied and purchased the patent pending.

Leonard J. Strnad II is a 30-year veteran in the art of Jewel Engineering. His vast knowledge in all areas of the jewelry field including design, engineering, advance production methods, and all inclusive to the field of cutting are taught from owning and management of multiple jewelry stores from studio to the current guild level operation. Strnad is a St. Ignatius High grad with intensive schooling in GIA training, Cad Cam Jewel Engineering and a CNC authority. He has been poised for this breakout event since designing both the Bill Clinton Inaugural Pin and Ronald Reagan Angel Pin. Strand has garnered many regional and national kudos. They include 2007 Ohio Jewelers Guild Best of Show honors, the 2008 JCK Jewelers choice awards. He was also recognized as a Jewelers Choice gold finalist as voted on by peers in the jewelry society.
John Kodama was born in Yokohama, Japan. John became a Christian at age 20, Graduated at Tokyo Electric Engineering College, and became a teacher of engineering Junior High school for five (5) years in Yokohama, Japan. Kodama, a noted Japanese gem and jewelry artistic with international standing, holds a Master's from UCLA and studied in South Africa mastering Ideal cut diamonds. He invented the renowned Eight-star concept (known as the world's most precisely-cut stone), and the leading-edge CKC Crown (Japan) and LKC Crown (American) technologies that set industry standards for light capture essential to finish-diamond brilliance. (Proportion Demonstration Module 1, or Leakage of Light Unit for the GIA). John invented the eight (8) star concept for the best symmetrical proportion in the Ideal cut. In 2007, John invented the CKC cutting method that will revolutionize the diamond and colored gem industry. John has provided his invention and discoveries to trusted colleagues and friends worldwide in order to maintain growth and integrity of the diamond and gemstone industry.

Vivinity is a diamond and gemstone method for cutting faceted gemstones. The cutting process can happen in two methods. The first method is to resurface the facets of existing cut diamonds and gemstones and to meet our criteria; the second method is to cut from raw crystal structure.

The benefit from this cutting method is that the diamond and gemstone (natural and synthetic) have increased light performance. Light performance is described on how light travels into the crystal and returns out after a series of reflections take place inside the gemstone. The Vivinity cut shows an increase performance up to 400% brighter then the industry standard "Tolkowsky cut".

"Our mission is to create jewelry heirlooms into the future,” said Strnad. Indeed, the new Vivinity cut, fashioned to capture brilliance forever, is a shooting star you can actually call your own. The goal in creating this new cut is a standard that "breathes light and exhales fire! "Total performance in all lighting applications is amazing,” said Strnad. "The Vivinity is dramatic and arresting under all light sources - fluorescent, incandescent, metal halide, fiber optic and natural light, and even low light applications. The cut maximizes brilliance under every circumstance.”

Applications for the Vivinity cut go beyond diamonds. They bring excitement and life to many other gemstones and synthetic jewels as well. "The theory is to maximize the crystal,” explains Strnad. "The cut enhances crystals to become gems and includes nuances like color enhancement that are dramatic. For instance, diamond color looks 2 to 3 shades whiter to the naked eye and colored gems become translucent, brighter and more desirable.” With the process, Strnad can re-cut customers existing diamonds or other gemstones to enhance quality and increase current value in many applications.

The buzz about this new diamond is just beginning. Under construction is a special website, www.vivinity.com. An in-person stop at Vivid Diamonds, Design & Timepiece Gallery in Bay Village, Ohio will give customers a chance to see the difference. You can compare standard diamonds and the Vivinity cut side-by-side. And, there is a contest in the works to help come up with slogan for the diamond. "The Super Nova effect speaks for itself, but we feel clients will bring a unique element of partnership to its identity,” said Strnad.